The Excitement of finding a Possible treasure!

We had a surprise visit from our grandchildren last weekend.

They love to explore La Chatouillette and its surrounds.

When, bristling with excitement, they ran to us and shouted that they thought they’d discovered a hidden treasure, at first we didn’t pay much attention.

When they showed us the old, heavy brown stone that appeared to have an ancient inscription on it, we suddenly became more interested. Was it a relic from King Arthur and his knights, who once, long ago, as the legend goes, camped near La Chatouillette?

Perhaps it was a treasure hidden by the fleeing German army, who were overpowered by the Allied Forces in WW2?

After all, the famous American ‘General Paten’ did once set up camp in a field next-door. 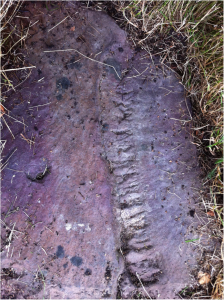 Our grandchildren have now sadly returned to England and we’ve had a chance to dig up the old stone.

Regrettably there is nothing hidden under it but the indecipherable inscription carved on the face of it, still brings goose bumps to our skins.