Quick glance and you’ll miss it

An hour and a half walking round the lake and woods in the soft crunchy snow. At one short moment in time, the sun tried to come out making everything that much brighter and noticeably more in contrast with the bark on the trees and the flowing river.

Discovering snow patterns, hanging icicles off reeds and overhanging branches that dipped into the passing river…… and more mole hills, don’t they ever have a rest? Huge fresh piles of dirt next to frozen mounds covered in snow.

Birds rustle about in the trees shaking the snow off the overhanging branches. What’s been down to the river for a drink? Footprints wind around the trunks of trees and off into the woods.

It all looks fresh and undisturbed. Calm and clean. No mud or leaves, only patches of frozen ice and drifts of white snow.

On one hand cozy warm and  frozen fingers on the other hand from taking photo’s. Battery dead, toes numb, it was time to head home for some coffee and bacon and egg.

Footprints recorded ,a pair of ducks, robins, and Heron…. seen what a lovely morning.

Little did I know  what would happen next.

I had taken off my hat, gloves and Wellies off ,my fingers and toes stinging with the warm, Kettle, I bent down to get the milk out of the fridge and something just caught the corner of my eye as I turned my head and glanced towards the glass door.

A flash brown…had it legs…. how big was it …what was it? Quickly…

I opened the door quickly, head out first Peep…. Wow, it was all fluffed up,feathery and had yellow legs!

I had no time to put on my Wellies, I shouted to Allan to come quickly and have a look .

iphone grabbed quickly off the table, I just swiped it as fast as I could to open the camera.  All I could think about was, would it still be there? Hurry up fingers!! they were not doing what they were supposed to do because of them warning up . I crouched down outside on the backdoor step, it still did not move from the corner it had snuggled into. Cold wind blowing its feathers.

Snap, snap, closer and closer with the zoom, I couldn’t believe my eyes. The tinkling sound of wind chimes, it lifts its head up to the sounds and then at me, straight into my eyes… it gazed and gazed. It was stunning.

I was not sure what I was looking at. Not your typical bird table species!!

Allan was here now,stay behind me, move slowly. Its little eyes looked up at the movement behind me, it did not seen frightened or make a move to fly off.  I carried on shooting photos.

RSPB  book out…. It was a  small male Kestrel. Yellow claws, yellow pointed beak, long tail feathers,  on its back brown with black spots.

It was truly  a special moment  to be so close to such a wild bird and here are the  amazing photo’s. 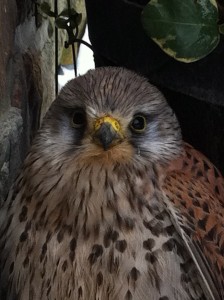 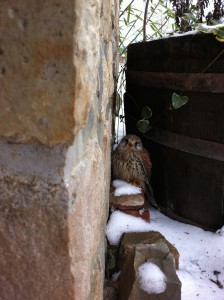 The wildlife here is all around, just take a moment to open your eyes, be still and amazing things will be seen.