Carp fishing on a dry fly

It’s said that Carp, during summer, when there’s a hatch of flies, occasionally do feed naturally off the surface. This, however, does not seem to be a very frequent occurrence.

At La Chatouillette’s private lake in Normandy, together with two experienced fly fishermen, we’ve been trying out various methods of using dry fly for Carp.

Our lake is just over one acre. It’s well stocked with healthy Carp. Three natural underground streams feed the waters.

The lake is positioned next to a trout river in a natural forest reserve.

The weather was overcast, the waters dark and the fish difficult to see.

The afternoon’s fishing lasted from two o’clock to around five in the evening.

We attracted the Carp to the surface by throwing pieces of baguette, which were about one or two inches in size. The Carp would not feed on these close in, so the bread was thrown out as far as possible.

Other species of small fish were initially attracted to the bread. At first this annoyed us, but we soon realized that when these small fish scattered, we knew that there was almost certainly a Carp rising underneath.

Both the little fish and the bread were working together to attract the Carp.

We immediately cast our flies close to the spot where the bread had been floating.

Using a floating line we waited for the Carp to suck the fly in. When this occurred, it happened almost immediately after the Carp had taken the bread.

The fly we used was a DDT made of spun Klipspringer, spun onto the hook.

It appeared that the Carp would often take the fly thinking it was another piece of bread.

The DDT fly, using a number ten hook, was our closet in colour to the bread.

There may well be more appropriate flies, which might attract the Carp even more readily.

The tiny things pictured below catch BIG carp: DDT on the left and Beetle fly on the right. 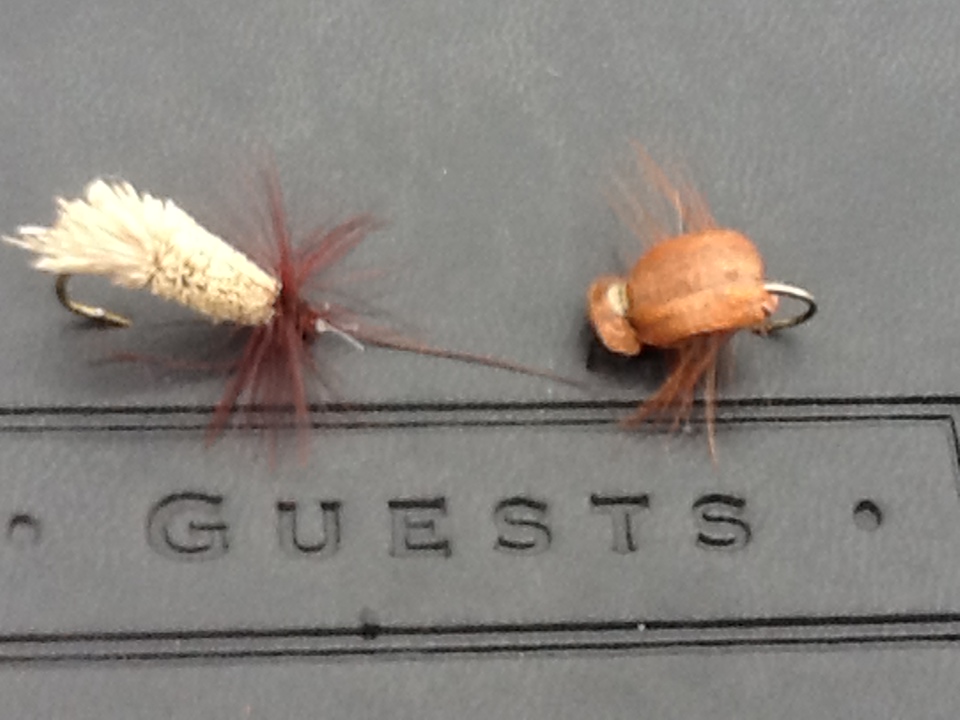 Our success rate was satisfying. After about three hours of fishing, we landed twelve Carp, between 14 to 20 pounds. Unfortunately, we lost the largest Carp which weighed around 25 pounds, due to the fact that the hook became dislodged.

Our hooks were barbless and the Carp were all returned safely to the lake.

The fishermen were excited by the success of this experiment. They said that it was not often that they’d had the opportunity of landing such large fish on a fly.

It seemed to us, that the smaller Carp, around 14 to 18 pounds, gave better sport.

The larger fish appeared to tire more readily. After about fifteen minutes or so, they seemed to loose much of their initial resolve.

These photos show two of the Carp caught with a DDT and a beetle fly .