Birdwatching… A review by RSPB members Nic and Sheila

We came on this holiday armed with binoculars and cameras in the hope that we might see some interesting birds and we weren’t disappointed.

Each morning we wake to the sound of birdsong and when we venture out early, the birds are already happily going about their business.

Large numbers of Grey wagtails perch on the telegraph wires near the Gite and occasionally we would hear the sweet sound of Warblers.

In the nearby woods the distinctive sounds of Woodpeckers and Cuckoos fill the air.

The Swallows, having recently arrived from Africa, skim over the lake in a brilliant acrobatic display. One day we spent over an hour trying to capture the perfect moment when the Swallows skilfully dipped, with great precision, for their evening drinks.

The Heron, a welcome sight, thankfully only by-passed the lake, as he was not, on this occasion, in need of a meal and the fish were safe!

We puzzled over one particular bird. Was it a Starling, a small crow or a black bird? We subsequently discovered it was in fact the more rare Ring Ouzel. 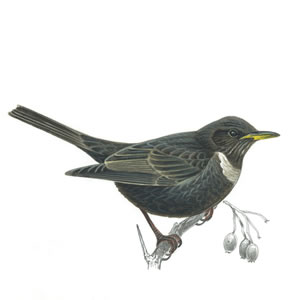 Allan and Josie asked us where we thought suitable locations could be found, close to the wood, for a hide and bird feeding station. Having suggested the perfect sites, we are relieved to be leaving them to get on with the job!